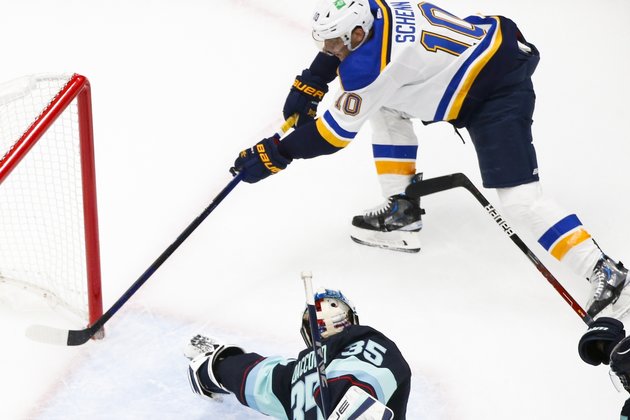 Ville Husso made 27 saves for his second shutout of the season and the third of his 28-game NHL career as the St. Louis Blues defeated the host Seattle Kraken 5-0 on Friday night.

Tyler Bozak scored a short-handed goal and Brayden Schenn tallied on the power play in the first period, then Pavel Buchnevich scored at even strength and Colton Parayko converted a penalty shot in the third as the Blues posted their second straight win and their fifth in the past six games.

Jordan Kyrou added an even-strength goal at 9:31 of the third period to cap the scoring. Brandon Saad had two assists and was the game's only player with more than one point.

Seattle goalie Joey Daccord, recalled from Charlotte of the American Hockey League with Chris Driedger in the COVID-19 protocol, stopped 26 of 31 shots in his first NHL appearance since a 6-1 loss to Pittsburgh on Dec. 6.

The expansion Kraken had a two-game winning streak snapped, which tied their season high.

Bozak opened the scoring at 5:54 of the first, creating a turnover in his own zone that led to a two-on-one break. He took a cross-ice pass from Saad and fired the puck into the empty side of the net.

Schenn scored for the second straight game since returning from the COVID-19 protocol, swiping a loose puck into the net from the crease at 10:23 of the first. He had two goals and two assists in a 5-3 victory Monday against the visiting Nashville Predators.

After a scoreless second period, Buchnevich increased the lead to 3-0 on a shot from the right faceoff circle just 24 seconds into the third. Buchnevich, who got the winner in a 2-1 decision against the Kraken on Jan. 13 in St. Louis, returned Friday from the virus protocol.

Parayko scored on a penalty shot at 7:40 of the third after Seattle's Jordan Eberle was called for hooking on a breakaway.