Rangers' Chris Kreider out to extend goal streak at Columbus 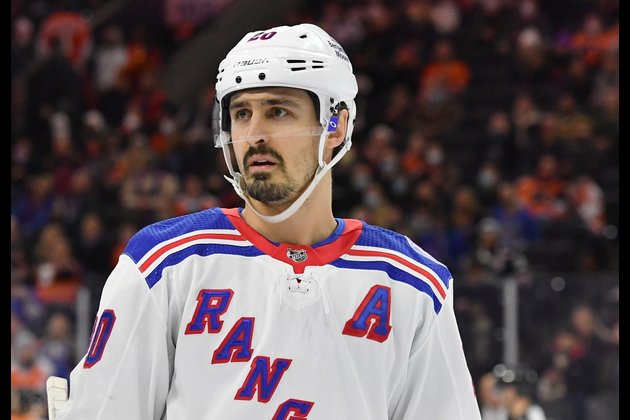 Chris Kreider already joined some elite company in the extensive history of the New York Rangers when it took him just 43 games to score 30 goals.

Kreider looks to add to his league-leading total and the Rangers hope to continue their roll Thursday night when they visit the struggling Columbus Blue Jackets for their final road game before the All-Star break.

Kreider is one goal one ahead of Washington's Alex Ovechkin and Edmonton's Leon Draisaitl for the league lead. The New York winger scored for the sixth straight game when he netted a power-play goal Monday in the Rangers' pulsating 3-2 win over the visiting Los Angeles Kings that was decided on Adam Fox's goal in the sixth round of the shootout.

"The best thing about playing hockey is winning games," Kreider said. "From a personal standpoint, scoring goals helps our team win. If I can keep doing that and helping our team win, that's all that matters."

Kreider has nine goals during his career-high streak and is the first Ranger with goals in six straight games since Mika Zibanejad (2019-20).

Kreider's roll has helped the Rangers earn nine wins in 12 games. With four games left before the break, they are looking to finish strong and get off to better starts after being outshot 16-4 in the opening period on Monday.

"Every game is a big game, but we've got four to that break and it would be nice to get some good wins for sure and set the tone for when we come back," New York coach Gerard Gallant said after Wednesday's practice.

Columbus has been outscored 13-3 during a three-game losing streak and has allowed 22 goals in its past four losses. The Blue Jackets have allowed at least five goals 11 times, and they dropped to 0-11-0 in those games after falling 6-0 to the visiting Calgary Flames on Wednesday when they were outshot by a whopping 62-23 margin.

According to STATS, it was the most shots by a visiting team in a regular-season game since the NHL began tracking shots on goal in 1955-56. The Blue Jackets were outshot 46-14 in the final two periods, when they allowed five goals.

"You don't have to dissect this," Columbus coach Brad Larsen said. "They were the better team. They had the puck all night. We were not nearly good enough."

Columbus is 6-15-1 since winning 12 of its first 18 contests, including 1-6-0 in its past seven home games. The Blue Jackets also have allowed at least five goals in nine games since the quick start.