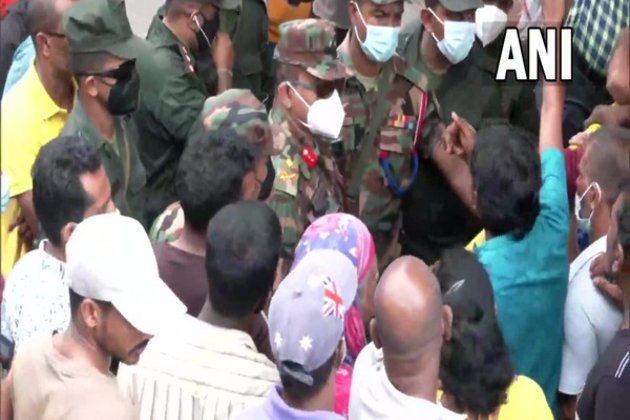 By Ashoke RajColombo [Sri Lanka], May 14 (ANI): Colombo police called army personnel to disburse the crowd over the demand for cooking gas at a Slave Island Police Station on Saturday.

"We are here since morning and we are not getting gas and I think these people are selling gas to hotels and rich people," a woman protestor told ANI.

People including women and elderly people and children were chanting "Diyaw Diyaw gas diyaw" on demanding gas for their daily necessities.

"We have children in our house, we are not able to cook food for them, we are struggling for gas for a month," another woman protestor said while speaking to ANI.

Notably, Ranil Wickremesinghe told the media after assuming the post of Prime Minister that his first challenge is to uplift the country's economy.

"I want to settle this problem to ensure the supply of petrol, diesel and electricity to the people," said Wickremesinghe, as reported by Colombo Page.

Post Wickremesinghe's oath-taking ceremony, he said that "we need to create a country with a future for the youth, where people can eat three meals a day again and free of queues soon."Presently, Sri Lanka is facing its worst economic crisis since independence with food and fuel shortages, soaring prices and power cuts affecting a large number of the citizens.

At the same time, the country continues to negotiate with the International Monetary Fund (IMF) to bail out its struggling economy.

It is to be seen how Wickremesinghe assuages the anti-government protestors in the near term, with President Gotabaya Rajapaksa, the central figure whose ouster is being sought by the protestors, still in place. (ANI)