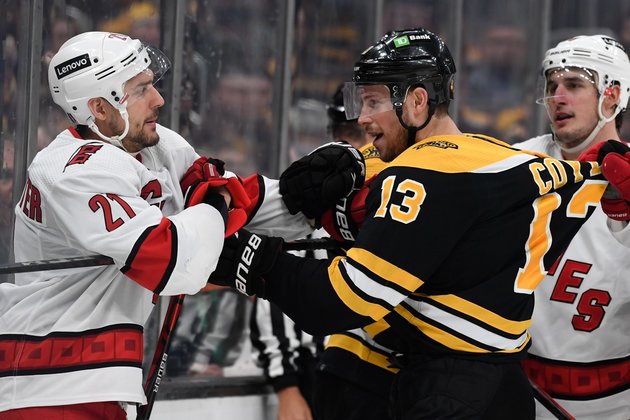 Max Domi had two goals and an assist to help the Carolina Hurricanes fend off and eliminate the visiting Boston Bruins with a 3-2 win in Game 7 of their first-round series on Saturday.

The Hurricanes withstood a goal and ensuring flurry in the final 22 seconds to seal the win.

Domi's output matched the Hurricanes/Hartford Whalers franchise record for most points in a Game 7.

Carolina will face the winner of the series between the New York Rangers and Pittsburgh Penguins in the second round of the Stanley Cup Playoffs.

Teuvo Teravainen had a goal and an assist, and Jaccob Slavin had two assists for the Hurricanes, who are 6-0 in Game 7s since relocating from Hartford. Antti Raanta made 26 saves.

Jake DeBrusk and David Pastrnak scored, and Jeremy Swayman made 28 saves for the Bruins.

Teravainen gave Carolina a 1-0 lead at 18:36 of the first period. Slavin, at the left point, sent a pass to Domi at the far side of the net and Domi quickly dished to Teravainen in front.

Taylor Hall was assessed a double minor for high-sticking with 58 seconds remaining in the opening frame. Vincent Trocheck came close to doubling the Hurricanes' lead on the power play carryover 46 seconds into the second period but his shot hit the post.

The winger won a battle in the corner and got the puck back to Brady Skjei at the point. Skjei's shot to the net redirected off Jordan Staal in front over to Domi at the side of the net, who tucked it in on the backhand.

DeBrusk cut it to 2-1 just under two minutes later. Patrice Bergeron's pass attempt from the left wall to a pinching Charlie McAvoy missed the defenseman, landing on the tape of DeBrusk at 5:04.

Trent Frederic came close to netting the equalizer at 10:19 of the second period, but his shot from the high slot hit the post.

Domi made it 3-1 just 14 seconds later with Teravainen feeding him for a one-timer from the slot at 10:33.

With the Bruins' net empty, Pastrnak capitalized from the left circle to narrow it to 3-2 with 21 seconds remaining in the third.