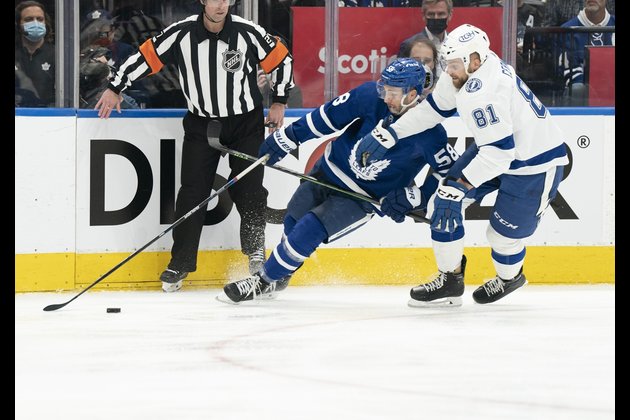 Andrei Vasilevskiy stopped 30 shots in a strong effort in goal for the Lightning, whose pursuit of a third straight Stanley Cup remains alive.

Morgan Rielly scored for the Maple Leafs, who have not won a first-round playoff series in seven attempts since 2004.

Jack Campbell made 23 saves for Toronto.

Paul scored his first career playoff goal at 18:24 of the first period, After carrying the puck up the left wing on a breakout following a Toronto rush, he knocked in the rebound from Ross Colton's shot. Cal Foote also earned an assist.

The goal came shortly after Tampa Bay's Brayden Point went to the locker room with an apparent leg injury. Point returned to play one shift in the second period and no more afterward although he stayed on the bench.

Tampa Bay had an 8-6 advantage in shots on goal after one period.

John Tavares put the puck in the net for Toronto at 8:32 of the second period. It did not count, however, because Justin Holl had been called for interference.

Tampa Bay applied furious pressure on the power play, but Toronto was able to survive.

Rielly tied the game on his third goal of the series at 13:25 of the second. Matthews set up Rielly for a shot from the right circle. Mitchell Marner also assisted.

Paul answered with his second goal at 16:32 of the second. He eluded TJ Brodie and kicked the puck back up to his stick before shooting it past Campbell. It came shortly after Vasilevskiy made a superb save.

Tampa Bay had a 19-14 edge in shots on goal after two periods.

Campbell was shaken up but stayed in the game early in the third period when Paul crashed into the net on another rush.

Toronto went on a power play at 6:19 of the third but Vasilevskiy held up under intense pressure.

Toronto removed Campbell for an extra attacker with more than two minutes to play, but the Lightning held off all challenges to advance.

Drag Me to Hell

Drag Me to Hell